Your Kit
At Freelancer Direct we can hire you a range of equipment, just check out what we have available from the list below.  If you need any other equipment just give us a call on 01202 878030 and we will see if we can help.  We have relationships with a range of facilities in London and Bristol who can ship equipment to Bournemouth so the only thing to hold you back is your imagination!  Remember to state when you book your freelancers if you need any equipment and if you dry-hire kit please ensure you have the appropriate insurance which includes loss of hire cover.  To hire kit, either call us on 01202 878030 or go to our on-line booking form, which is here. 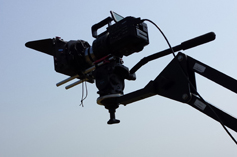 We can offer you a strong range of camera equipment which can be hired directly or with one of our camera operators.  Most operators or Shooting Directors will attend a shoot with a camera they know will capture the best image for you.  In most instances, the camera will be a Canon 5D or 7D, however, we have a range of cameras for different productions depending upon your needs; please take a look below and if you would like a particular camera, please state so when placing a booking.
Canon 5D 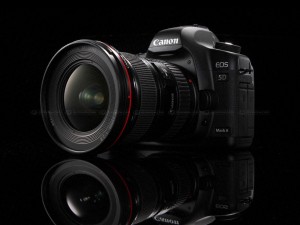 The Canon EOS 5D Mark II is a 21.1-megapixel full-frame CMOS digital single-lens reflex camera capable of recording video at full HD at 1920 × 1080 and SDTV at 640 × 480 resolution.  The 5D Mark II is capable of recording in low-light situations and can shoot at 30 fps in NTSC format and 25 fps in PAL format. The Mark II has a full-frame 35mm-format (24x36mm) CMOS sensor capturing image files with incredible quality as either JPEG, RAW or RAW+JPEG files. The camera also incorporates Canon’s acclaimed DIGIC 4 imaging processor that works in concert with a high-speed DDR-SDRAM buffer to ensure quick performance and fast image processing times. Performance enhancements enabled by the DIGIC 4 processor include noticeably improved image quality at all ISO sensitivities, fast start-up and reaction times, improved battery life, and improved noise suppression at ISO sensitivities ranging from ISO 100 to ISO 6400 Notable film and television productions that used the Canon 5D Mark II include the House episode “Help Me”, broadcast by Fox on 17 May 2010, which was shot entirely on the Canon 5D Mark II, replacing the drama’s usual 35mm film format; and the Hawaii Five-0 TV series was shot using Canon 5DmkII. 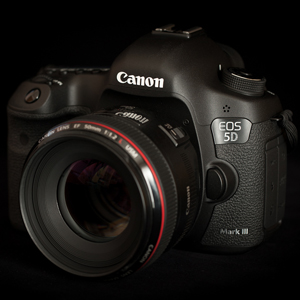 The Canon EOS 5D Mark III is a 22.3-megapixel full-frame CMOS digital single-lens reflex camera.  The Mark III builds on the reputation of the Mark II, with a range of new features.  As well as offering the depth-of-field control loved by film-makers, the new full-frame sensor combines with the vast processing power of DIGIC 5+ to improve image quality by virtually eradicating the presence of moiré, false colour and other artefacts. Additional movie functions include manual exposure control and an enhanced range of high bit-rate video compression options, with intraframe (ALL-I) and interframe (IPB) methods both supported. Variable frame rates range from 24fps to 60fps, and the addition of SMPTE timecode support provides greater editing flexibility and easier integration into multi-camera shoots. Users can also check and adjust audio during recording via the camera’s Quick Control screen and a headphone socket enables sound level monitoring both during and after shooting.
Canon 7D
The Canon EOS 7D is a semi-professional cropped sensor digital single-lens reflex camera.  DSLR Cameras offer a filmic shallow depth of field and full HD video recording. They also respond well in low light, so are the low-budget film-maker’s dream! The 7D also offers slow-motion recording at 50fps at 720p.  The video functions gives the operator more control over the videos they create and the camera also offers the ability to record audio from an external source.  Both shutter and aperture are available for manual control, and the 7D also provides multiple frame rate options, including three that match the HD television timing specs. Separate movie clips that are captured but these are limited to twelve minutes in the high definition 1080p and 720p modes, or 24 minutes in the standard definition VGA mode.  The Canon 7D is currently one of the main cameras used by independent filmmakers, and was used on the feature films Black Swan, Stanley Ka Dabba and Vazhakku Enn.
RED

There are a range of RED cameras available, the RED ONE, RED SCARLET and RED EPIC’s.  RED cameras are best suited for drama and high end television commercials where image quality or shutter speed are vital creative elements.  If you would like to shoot using a RED camera please consult the camera operator before confirming your booking.  It is also essential to hire a full camera team to support the production and a separate sound recordist.  Freelancer Direct can supply a full team for a RED shoot, please contact us directly to confirm a booking. For more information on the range of RED cameras available please visit the RED web site here: www.red.com/products
Black Magic 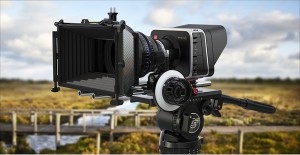 Black Magic Design offer a range of cameras for video production.  The Blackmagic Cinema Camera and the Blackmagic Production Camera are the two main cameras available. The Blackmagic Cinema Camera shoots at 2.5k and is suitable for a range of video productions whilst the Production Camera shoots at 4k and is best for high end commercials and drama productions.  If you would like to shoot using either camera please consult the camera operator before confirming your booking.  It is also essential to hire a full camera team to support the production and a separate sound recordist.  Freelancer Direct can supply a full team for a Blackmagic shoot, please contact us directly to confirm a booking. For more information on Blackmagic cameras, please visit here: www.blackmagicdesign.com/products 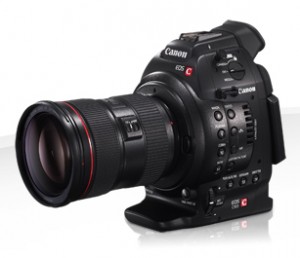 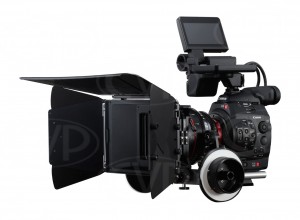 The EOS C300 is a digital cinema camera in the Cinema EOS range.  The camcorder has the form factor of a supersized DSLR but shoots full HD 1080p.  Rather than the moire-pattern inducing line skipping method employed in the EOS 5D Mark II, the C300 uses a far more video-friendly down-sampling method whereby a group of 4 pixels are sampled and then mapped to each final output pixel. Vincent Laforet was given access to a prerelease version of the EOS C300 to shoot the short film Möbius. In addition, the C300 was used along with other Canon EOS dSLRs (such as an infrared-modified Canon EOS 5D Mark II) on the short film When You Find Me, directed by Bryce Dallas Howard and produced by her father Ron Howard.
Sony NEX-FS700EK 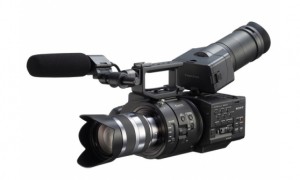 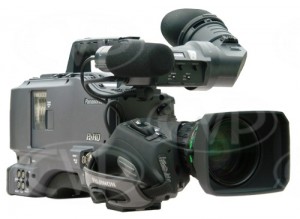 The Panasonic AG-HPX500 is a high definition camcorder designed for use with the P2 memory-based recording system. The camera truly shines in a wide variety of applications previously only possible on the highest-end Varicam. The unit is lightweight enough to take almost anywhere while still conforming to the shoulder-mounted form factor professionals require. Four P2 slots allow for up to 256 minutes of continuous recording.  The AG-HPX500 can shoot a variety of standard definition and high definition resolutions, including 720p, 1080i and 1080p. All footage is recorded to the industry-standard DVCPRO, DVCPRO50, DVCPRO HD formats, which can be used in almost every professional editing suite. Features such as variable frame rates, 60p, chromatic aberration compensation (CAC), cine-like gamma, and many others provide limitless possibilities for dramatic, news and sports productions. No matter what the task the AG-HPX500 has it covered.
Panasonic AG-HVX200 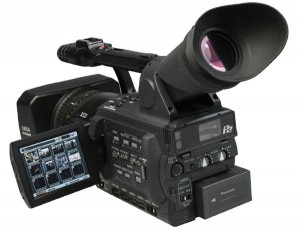 The AG-HVX200 is a fixed-lens hybrid camcorder recording onto P2 cards, as well recording onto traditional MiniDV cassettes.  The camcorder is capable of recording in several standard-definition and high-definition video formats. The image is always scanned progressively at 1920×1080 resolution, then is downsized to target frame size. Recording formats: All formats can be recorded onto P2 cards. Only standard DV video can be recorded to MiniDV tapes. In 720p mode the camcorder offers variable shooting rates for overcranking/undercranking. The camcorder is popular with independent and professional film and television companies. The BBC used the HVX to shoot all their coverage of the 2006 and 2010 Olympics and the Fox network is using P2 exclusively at all network owned-and-operated stations.  The New York Film Academy and San Francisco State University’s Digital Video Intensive (DVI) program use HVX200s for their film school.

Depending upon your shooting location, additional lighting may be required.  We can offer a range of lights to support all productions from office-based interviews to larger dramatic productions in studios or on location.  Please note that for complicated lighting setups where a generator is required, additional crew support will be need.  If you think your production needs lights, please specify this when making a booking.  We are happy to discuss this with you to ensure that you hire the right lighting.
Soft Lights 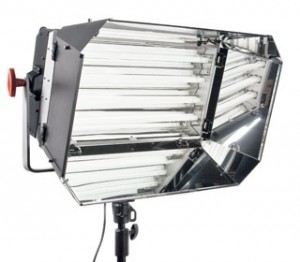 Soft lights are ideal for main lighting or cyclorama backgrounds. The effect is generally soft and with very diffused shadows.  There are two main ranges of soft lights, Ianiro and Keno both offering a range of two tubes (110W), four tubes (220W) and six tubes (330W) models. Most models are available with local dimmer on board, with DMX control or with phase control for external dimmers. The soft lights can be equipped with mirrored four-leaf barndoors and corners that intensifies the light.  Softlights are often used in conjunction with other lights or light sources to add a more directional light, creating shadows and a stronger three-dimensional look to the image.
Tungsten Lights 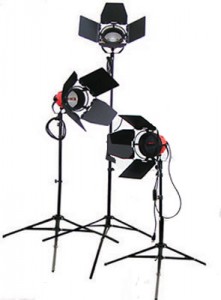 Tungsten lighting is a term used by film-makers to distinguish between fluorescent lighting and soft lighting. Tungsten is a type of incandescent lighting using a bulb with a filament made of the metal tungsten, as opposed to, say, carbon or platinum.  We have a range of lighting available including:
Dedolights 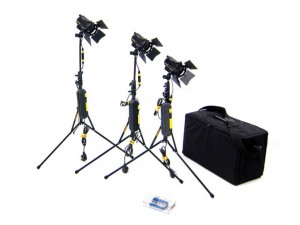 Dedolights offer a highly directional light, they can be spotted at certain areas of your set to work as fills or backlights. These lamps are not particularly powerful (150W), so they are suited well to close-up shots and interior scenes.